This week BBC Newsbeat spent time at Harrogate District Hospital finding out about the Healthcare workers working on the frontline. They spoke to Joe Albro from Harrogate Integrated Facilities who shared with them his personal experience working as a Porter during the Covid-19 pandemic.

Joe has been working as a porter since July 2019, when his fiancée (who also works at the hospital in HR) saw the job advertised. Six months into the role, the pandemic hit and Joe’s already busy job got much busier, although he says the second wave was much worse than the first.

The pandemic also meant that, like many, he was unable to see vulnerable family members including his mother who suffers with multiple sclerosis.

Speaking to the BBC, Joe said he racks up about 23,000 to 30,000 steps per day on average and is responsible for transporting samples, bloods, swabs, and other equipment as well as patients from one part of the hospital to another.

Joe also highlighted that while the NHS has received a lot of support and appreciation over the past year, porters are often forgotten as people don’t always see what goes on behind the scenes.

Joe said, “The job was already busy, but when Covid happened it got crazy. The second wave has been manic… you can work non-stop some days – walking everywhere and pushing stuff around. It is exhausting.

“Some people think all we do is collect specimens but there’s also the not-so-pleasant side to the job. Personally the thing I struggle with the most is when I go onto a ward and someone is suffering with dementia – they are scared and shouting for help.

“There’ll be someone else there to help them, but as a porter you just have to ignore it and naturally you want to help.

“You just always have to try and look on the bright side, and know that patients are in the best place they can be.” 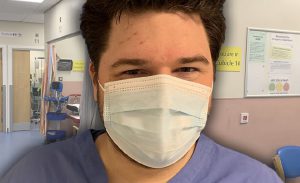